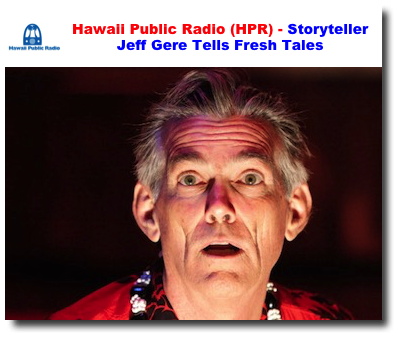 One of Hawaiʻi's most popular storytellers Jeff Gere performs a collection of his greatest hits and popular stories on June 23 in HPR's Atherton Studio. Known for his physical energy, elastic face, and ability to portray multiple characters, Gere will share pieces he's never recorded before, including fables by Aesop, entwined tales of tragic love, and stories of the volcano goddess Pele.

Reservations for "Fresh Tales on an Old Tongue" may be made online at www.hprtickets.org or by calling the station (955-8821) during regular business hours. Tickets are $25 general, $20 for HPR members, and $15 for students with ID; online ticketing fees apply. The Atherton Studio is located at Hawaiʻi Public Radio, 738 Kāheka Street. Doors open at 7:00 p.m.; stories begin at 7:30 p.m.

Jeff Gere is a master storyteller & puppeteer with degrees in Painting, Art History, and Performance Art. He was the Drama Specialist for the City & County of Honolulu's Parks Department, now retired. Gere founded the Talk Story Festival, Hawaiʻi's largest storytelling event, and produced and hosted it for 26 years. He has also toured throughout the state, and told in national and international venues. He has recorded ten CDs and two DVDs.

WHAT: Fresh Tales on an Old Tongue

RESERVATIONS: Call 955-8821 during business hours or reserve seats at hprtickets.org

The Atherton Studio seats 75 people and is home to a magnificent Bösendorfer concert grand piano. The Studio is available for rent for musical performances, community group meetings, and lectures. It is located in the HPR office and studio complex at 738 Kaheka Street, across from the Honolulu Don Quijote. Metered street parking is available, as are paid lots at the First Hawaiian Bank (Kapi‘olani branch) and in the Pan Am building.